During my 45 years as a solo horn player in several orchestras and as a soloist, I have used and continue to use instruments made by several makers. While still a student, I received my first horn in 1955, a compensating double horn in Bb/F by Eduard Kruspe (Erfurt). Some years later, I acquired a single Bb horn with five valves by the same firm.

Since 1965, I have been using single Bb horns made by Walter Mönnig (Markneukirchen). In opera performances and concerts, I prefer a model with a wide bore and extendable stopping valve; as a soloist, I use one with a medium bore. For my solo instrument, Walter Mönnig produced an additional slide to tune it to A. I use the A horn to play the Haydn concertos, Carl Maria von Weber's Concertino op. 45, Franz Danzi's Concerto in E and Albert Lortzing's Concert Piece in E.

During one of my concert tours, I came across a horn model by Engelbert Schmid (Tiefenried) in 1981. Since 1982, I have been using one of his single Bb horns with an extended stopping valve for solo concertos. With additional slides, it can be tuned to A or B natural. The B natural tuning is very suitable for performances with historic organs tuned to choir pitch (a half-tone higher than today's tuning pitch). Over the last years, more and more orchestral works (opera and concert) have been performed whose first horn part requires a double horn. For this reason, I have been playing a full double horn in Bb/F with stopping valve by Engelbert Schmid since 1996.

Usually, I choose different instruments for different occasions (orchestra, chamber orchestra, brass ensemble, solo recitals). In some recitals, for example, I might change between a single Bb horn and a double horn - not only because of some low notes, but also because I play entire parts of certain works on the F horn only.

In addition to these main instruments, I play horns by H. F. Knopf (Markneukirchen) (compensating double horn in Bb/F for chamber music and ensembles) and Yamaha.

I also own special instruments for very special tasks. For 30 years now, I have been playing a descant horn with a narrow bore in Bb/F-alto by Walter Mönnig (Markneukirchen). With a separate tuning slide it can be tuned to A/E-alto. This horn can be heard on the CD Hornkonzerte am Sächsischen Hof with works by Quantz, Zelenka, Heinichen, Telemann and Fasch (BERLIN CLASSICS 0011772 BC edel Gesellschaft Hamburg).

For decades now, I have been doing my daily training (warm-up, natural horn studies) on an old three-valve F Horn by the Sächsische Musikinstrumentenfabriken Klingenthal.

Since 1954, I have been using a mouthpiece made by Master Wunderlich (Markneukirchen). It is not a model, but a prototype. Master Wunderlich had a close look at my lips, made a mouthpiece, let me play on it, changed something, let me play on it again. Since then, it has been my well cared for mouthpiece. Many copies have been tried, but never came out as well as this one. Measurements: rim: 4.7 mm, cup width: 16.6 mm, cup depth: approx. 26 mm, slightly belly-shaped, bore: 4.7 mm.

In 1961, Christoph Werner Schmidt (Markneukirchen) made me a mouthpiece for my descant horn in F-alto. Measurements: rim and cup width as above, cup depth: approx. 19 mm, slender form, bore: 3.6 mm. 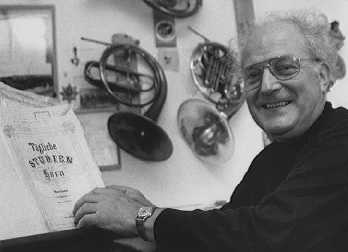 When Erhard Mauersberger began his career as Thomaskantor in 1961, he chose J. S. Bach's cantata Gott der Herr ist Sonn und Schild. For this occasion, I had Friedbert Syhre (Leipzig) make me a special mouthpiece. The measurements of the rim and the cup width are the same as in my usual mouthpiece. The cup depth, however, is only 13 mm and has been shown to be the most suitable one by trial and error. The shape of the cup is comparatively shallow for a horn mouthpiece, but ideal for that particular purpose. The bore is 3.5 mm. This mouthpiece makes it a lot easier to play the Bach cantata mentioned and other Bach cantatas as well. Due to its small measurements, it is also suitable as a standard mouthpiece for the piccolo horn.