The horn concertos by Richard Strauss are among the favourites of Peter Damm. On June 10, 1957 he performed the Concerto E-flat major op. 11 for the first time, accompanied by the Symphony Orchestra of the City of Berlin (Städtisches Berliner Sinfonie-Orchester).

On the same day 25 years later, he played his 111th performance of this concerto in a concert of the Staatskapelle Dresden in Venedig, conducted by Herbert Blomstedt. In Osaka in May 2000, Peter Damm ended his last tour to Japan as a soloist with the 157th performance.

This essay is the first extensive report on the history of this horn concerto. In Berlin in February 1884, the young Strauss had first encounters with the conductor Hans von Bülow and with Gustav Leinhos, 1st hornist at the orchestra at the ducal court in Meiningen, both of whom were to influence him. The correspondence between Leinhos and Strauss proves that Bülow had advised changes to the solo part of the concerto. An undated note, whose writer could not yet be identified, informed Strauss on the suggestions for change. A handwritten solo part, which can be attributed to Franz Strauss, helps to explain further differences between the solo part of the autographic piano score, the printed solo part and the solo part in the score. 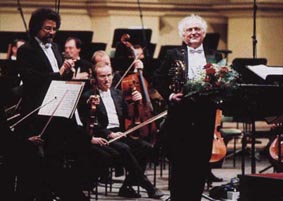